From a Jobbler: How I turned a gig into my full time job

From a Jobbler: How I turned a gig into my full time job

The rise of the gig economy is allowing workers to expand their networks and make those one-time jobs into something more. How do I know this works? Well, I started as a Jobbler in 2015 and, after some steady gigs, earned a permanent position with Jobble’s HQ in 2019. Whether you are a full time freelancer or someone who works gigs as a side hustle, here are three ways you can make sure the doors don’t close when the gig ends.

1. Get your foot in the door 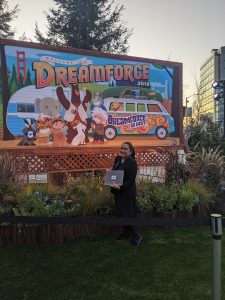 While in college, I looked for side jobs to bring in extra money and kept an open-mind when it came to job types. I applied to events, administrative work, cleaning/housekeeping, freelance writing…basically anything that would produce a paycheck.
When I found a Craigslist post seeking workers for a convention in 2015, I immediately downloaded the Jobble app, filled out my profile, and sent my application. Within a few days, I had been hired, given the job details, and found myself in a staff shirt surrounded by Jobblers and excited attendees.
Before I applied, I didn’t know how much I’d love working a convention. As soon as it ended, I was back on the app to find more opportunities like the one I just worked. My first gig was a great one and I wanted to do whatever I could to find the next one.

Many of the events that I liked working in Boston were annual, so I had to find ways to fill the time between shows. I met several helpful Jobblers while working different events in and around my home city. Identifying other friendly people who liked working the similar jobs was helpful because we could keep each other informed of opportunities coming up. For example, some of the people at one conference told me about a similar event scheduled for the week. Without them, I might not have applied on time!
Aside from making connections with my fellow Jobblers, I really took it upon myself to leave a lasting impression on my hiring managers. I learned how important it was to earn their trust and became the kind of person they wanted to keep on their team for multi-day jobs and other opportunities in the future.
Being a 5-star rated Jobbler definitely helped me stand out during the application process. As I worked more, my reputation grew, and there were times that my past hiring managers would reach out to me and ask if I could work something with them before they opened it up to the rest of the Jobble pool. The chance to apply exclusively was exhilarating, showed that my hard work was acknowledged and valued, and helped me keep my work schedule busy. 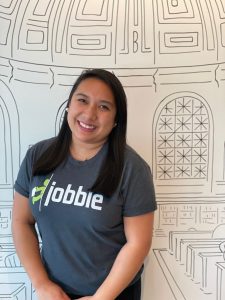 Jobble was a great fit for me because I could find as much or as little work as I needed. When I wasn’t working full time, I could use Jobble to find week-long gigs. When I worked full time but wanted to earn a little extra money, I searched for shifts at night or on weekends. No matter what, I searched for jobs with the companies I enjoyed as much as possible and spoke openly with my hiring managers about my availability, needs and interests.
In 2019, a hiring manager I worked with for a few years messaged me asking if I was available for their annual event. We had worked together once a year over the past three years and I emailed back to tell them I would be more than happy to work with them again. In addition to asking if I were available, they told me about a full time position they thought I would be a great fit for and asked if I was interested in the opportunity.
That hiring manager encouraged me to apply and also was a reference who spoke highly of my work ethic and growth over the years as we worked together. Because of the relationship I built with them, I got the job — a position at Jobble corporate.
When I first started working gigs, I didn’t know what to expect. But, once I worked my first conference and loved it, I realized I could stay in touch with my hiring managers and fellow Jobblers to make sure I didn’t miss out on any future opportunities. After building up my connections and my reputation, I was presented with a full time opportunity that I might not have found. Looking back, my story started with taking a chance on a gig and becoming a Jobbler. Now almost 5 years later, I am helping Jobble with its mission to put people to work.

Why 3PL’s Are Embracing the Gig Economy

0
0 Comments
In just a few years, companies like Uber and
Read More
Misc

Jobble is here to support the hustle of the independent worker.